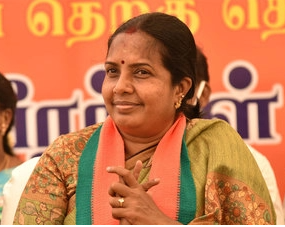 More than 500 women raised slogans against DMK leader Raja for his alleged unsavoury remarks against Tamil Nadu Chief Minister K Palaniswami and his mother a couple of days ago.

Addressing the protestors, Vanathi Srinivasan said the DMK was known for showing disrespect to women, which seemed to be part of its ideology.

She also recalled an incident where DMK propaganda secretary Dindigul I Leoni also made derogatory remarks against women during a campaign in the city a few days ago.

The BJP leader lauded AIADMK women workers, who were also present at the protest, for their discipline and culture, as they were followers of late chief minister J Jayalalithaa.