I will be a bridge between State and Centre: Vanathi 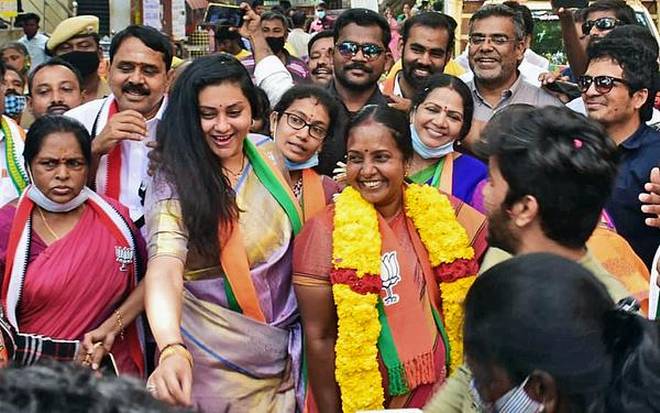 It was dusk. As the road users were honking their way through Mettupalayam Road, police personnel were busy ensuring that the restive crowd gathered at a temple near the North Coimbatore flyover did not slow the vehicle movement.

The crowd was there to welcome Bharatiya Janata Party candidate for Coimbatore South Vanathi Srinivasan, who was scheduled to begin her campaign.

After praying at the temple, Ms. Srinivasan, accompanied by former AIADMK deputy mayor Leelavathi Unni and the ward election in-charge Jayabal, got on the campaign vehicle. Focusing on the women there, she said, after the death of former Chief Minister Jayalalithaa, the AIADMK government under Chief Minister Edappadi K. Palaniswami had done so much for women.

In the manifesto too, the party had promised washing machine, ₹ 1,500 for every family and much more. The money would empower home makers, she said.

Reminding voters that the AIADMK and BJP were in alliance, she said that in Coimbatore South they would have to vote by pressing the BJP symbol, lotus. Throughout her campaign in A. Ramalingam Colony and its neighbourhood, she told the voters that voting for the BJP meant voting for the AIADMK.

In Bharathi Park and Ramnagar, where she campaigned during the day, she spoke about how she could be a bridge between the State and Centre and how she could leverage her party post for the benefit of people by getting increased funds for schemes connected to Coimbatore’s development.

Particularly when it came to schemes for the development of MSMEs or textile sector, her role as an MLA would be helpful. This put her in an advantageous position vis-a-vis the other contestants as she was from the party that ruled the Centre.

In the afternoon, in her interaction with members of the North Indian community, Ms. Srinivasan said though she lost in the 2016 election, the 33,000 votes she secured had strengthened her resolve to work for people in this constituency.

She also appealed to the crowd in Hindi to vote for ‘kamal’ (lotus).